May it do you good: Agnes Magnúsdóttir, the life and execution of an Icelandic peasant

In her novel Burial Rites Hannah Kent has imagined the last months of Agnes Magnúsdóttir, the last woman to be executed in . Agnes was condemned for complicity in the murders of Natan Ketilsson and “sheep-killer” Pétur Jónsson in 1828. She was then lodged with the family of a minor district official at Kornsá until the sentence was confirmed by the Danish king. Agnes was beheaded with Friðrik Sigurdsson on 12 January 1830.

This is a subtle and moving novel that wants to understand how a woman who had never been in any trouble could get mixed up with thugs and violent thieves. describes a thoughtful, relatively educated woman in search of a home who appears to get a chance to be a housekeeper or even a wife.
But Agnes is hemmed in by her class and bad luck in one of the least developed corners of a chronically underdeveloped country.

Agnes was born to unmarried landless farm workers, Ingveldur Rafnsdóttir and Magnús Magnússon at Flaga in Underféll parish in Vatnsdalur, north on 27 October 1795. She was “raised on a porridge of moss and poverty.”

She was born just 10 years after the catastrophic Laki volcanic eruption in south west  which from June 1783 to February 1784 spewed out tonnes of ash and sulphur dioxide creating a great smog. The years that followed were called Móðuharðindin—the hardship of the fog.

Móðuharðindin killed at least 10,000 Icelanders—one fifth of the population in the following year as toxic gases poisoned the crops and about 80 percent of the sheep and half the cattle and horses died of starvation. Fish was caught but local officials made no serious attempts to distribute it to the starving population—most of it was still exported. The winters that followed were ferocious.

When Agnes was born around 30 percent of babies born alive in Iceland died before they were one years old.[1] This was twice the level of infant deaths in and it was not just because of the climate and poverty, but because babies were not usually breastfed in in the 18th and early 19th centuries[2]. Only the poorest breastfed if no other milk were available. Otherwise in north babies were likely to get cow or sheep’s milk to suck through a rag until they were about three months old and then be fed dúsa. This was what babies in the south and west got within their first month of life—fish, butter or meat already chewed by adults. Dúsa killed children by intestinal blockages, swollen bellies (uppþemba) and dehydration from diarrhoea. Then there were epidemics of whooping cough, diphtheria and in 1797-98 scarlet fever.
By the time Agnes was born the Icelandic ruling class, made up of landowners, Danish or Icelandic officers of the Danish Crown and its Lutheran church, was a conservative force actively blocking development. Farm leases were often very short—even two or three years long—which allowed people no time to improve their land and buildings. If tenants did manage to make improvements then rents were often raised[3]. Land was much less productive than it could have been because old technologies such as drainage and manuring, well known in mainland Europe were barely used in Iceland. So soil was eroded and trees were lost.

The authorities saw any peasant family as merely a source of new paupers to be paid for by landowners and the church, so they ensured that most people could not marry with the Vistarband servant system. Everyone over the age of 15 who was not living with their parents or supported by them had to hire themselves out as a servant—an unmarried, indoor and outdoor farm worker contracted for one year at a time, for bed, board and low wages.[4] In most farms there were no more than one or two servants and often no separate bedrooms. Beds were ranged along the walls of the communal room, the baðstófa.

All land was privately owned and the authorities stopped tenant farms being rented to an unmarried couple even if they had scraped enough together to rent livestock and equipment from a landowner. They also prevented the development of fish processing industry to make sure they had enough labour for the hay harvests. By 1850 nearly 40 percent of the population over 15 years old were servants. In the winter women worked on wool processing while the men were sent to fish, for which they received no extra pay, though they may have received a share of the fish. with the majority of profit going to their employer.

When Agnes was born nearly 10 percent of all babies in were born outside of marriage.[5] Agnes' mother Ingveldur would probably not have expected to get any money as wages—she would have hoped for cloth and wool enough to make clothes for herself and her child. Even male workers saw very little cash. In Burial Rites as an adult Agnes goes to Búrfell farm because she has heard that the man said to be her father is working there. Magnús isn’t pleased to see her but he gives her some money. She says, “It was the first time I ever held money in my life.” For further detail on the lives of Icelandic peasants see my articles The Myth of Equality: the life of Icelandic agricultural workers and Lives Unfettered by Possessions or a Home

Unlike most other areas of as Agnes grew up the previous gap between the survival rates for children born in or out of marriage almost disappeared.[6] But still Ingveldur had to leave Agnes at six years old to be fostered out to Inga and Björn tenant farmers at Kornsá—the same place she would later be sent to wait execution. Inga taught her to read and write and the Sagas but died in childbirth when Agnes was eight in a winter that killed half their sheep. So with no money to pay a farm worker or keep children Kjartan, Agnes' foster brother went to his uncle and aunt and she was thrown back on the parish. Like all such children she worked.

In 1809 at 13 years old she was confirmed as an adult member of the church. She was described in Undirfell church book as having “an excellent intellect, and strong knowledge and understanding of Christianity.” Then she was known as Búrfell-Agnes for where she was born. She also developed the prized skills for poetry.

When Agnes arrived at Kornsá as a condemned woman in the summer of 1829 Jon and Margrét had been tenants with their two daughters Sigurlaug and Steinvör for ten years. They had been lucky and prospered with three farm workers though they had only recently before lost a servant Hjördís who died. Agnes could have been their servant as she had been in many of the farms in the area but she went to work for Natan Ketilsson.

Burial Rites is fiction for all Kent’s research of parish records but Agnes didn’t get much chance to tell her side of the story at the trial held at Hvammur the homestead of District Commissioner Björn Auðunsson Blöndal. She may have been part of a gang who tried to rob Natan but killed him and set light to his house hoping to get away with it. Or Natan and Pétur could have been killed by Friðrik alone or by other enemies. The district officials hesitated to bury Pétur in church ground because in February 1827 he had been convicted of robbery, theft and receiving stolen goods.

Natan also had at least a mixed reputation. He was said to have medical skills, had studied in and knew Latin. But he charged dearly for his skills, had children by at least one married woman and was entertaining Sheep-killer Pétur.

The authorities were very afraid of rebellious servants so when Agnes and Friðrik were executed their heads were stuck on spikes as a warning.

Poet-Rosa who was married to someone else but loved Natan and had two children by him gave Agnes a poem,

Agnes replied and so gets the last word here,

This is my only wish to you
Bound in anger and grief
Do not scratch my bleeding wounds
I’m full of disbelief.

My soul is filled with sorrow
I seek grace from the Lord.
Remember, Jesus bought us both
And for the same price.[7] 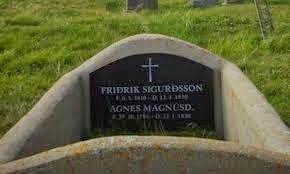 [1] In epidemic years such as 1846 around 60 percent of infants died. But in Vestmannaeyjar as many as 80 percent of babies died from newborn tetanus, Ginklofi. ’s chief medical officer, Jón Sveinsson sent a questionnaire to Vestmannaeyjar’s parish minister in 1789 to get reliable information about it. Ólöf Garðarsdóttir and Loftur Guttormsson, An Isolated Case of Early Medical Intervention—the battle against neonatal tetanus in the island of during the 19th century.
[2] The Development of Infant Mortality in , 1800-1920 by Loftur Guttormsson and Ólöf Garðarsdóttir.
[3] Gísli Águst Gunnlaugsson, Studia Historica Upsaliensia 154 Family and Household in  1801-1930 pg 79
[4] The word húsbóndi is lord, master, farmer. In modern Icelandic it is not used for a husband.
[5] Unmarried couples living independently became much more common in some areas over the next 60 years. So in Garðar and Bessastaðir parish on the south west coast of from about 1855 up to 55 percent of unmarried women giving birth lived with their partners. This parish had plenty of fishing opportunities and district officials were less able to exert financial control over the peasantry. From 1870 similar numbers of unmarried co-habiting couples blossomed as foreign capitalists brought money and raw materials looking for workers to profit from fishing and whaling.
[6] Ólöf Garðarsdóttir, The Implications of Illegitimacy in Continuity and Change 15 (3), 2000, p438
[7] price is translated as accord - p113-14 Burial Rites, Hannah Kent
Posted by Breiddalurblom at 19:13