Beware the fire and ice: Surviving Iceland’s volcanoes and the hardship of the fog

Volcanoes erupting beneath Iceland's largest glacier Vatnajökull are back in the news. This time it’s Bárðarbunga, under the northwest corner of the great Vatnajökull glacier which covers eight percent of the country. Dyngjujökull is a tributary glacier of Vatnajökull north of Bárðarbunga. Magma is flowing northeast from the Bárðarbunga crater towards the Dyngjujökull glacier 400 meters under the ice. Somewhat confusingly on this map showing the position of Bárðarbunga, the Vatnajökull national park is green while the rest of the country is white. Askja is a mountain further to the north east where the magma is heading. This is its crater--because unless Bárðarbunga blows there isn't much to see there.

Although over 3,000 earthquakes have been recorded in the area recently, this does not necessarily mean that Bárðarbunga will blow this week or next month. But it is steadily pushing out magma under the ice which is melting tonnes of the ice. As the meltwater builds up and finds a way out it will, probably, somewhere form a jökulhlaup—a glacial flood.

Iceland was created by a massive extrusion of magma built up from the faults between what are now the North American and Eurasian tectonic plates so eruptions and earthquakes are inevitable in the area. But if we’re lucky they are short lived—inconvenient and expensive—but do little long-term harm to living things and the atmosphere. If we’re not lucky an eruption can be a catastrophic outpouring of poisonous sulphur dioxide and fluorine and ash to wreck the climate.

So while we’re waiting for Bárðarbunga to settle down or create chaos, I recommend a new book, Island on Fire: “the extraordinary story of Laki, the forgotten volcano that turned 18th century Europe dark" by science journalist Alexandra Witze and Jeff Kanipe editor of Astronomy magazine. 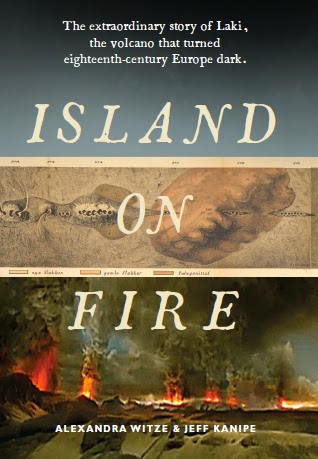 The book is a fascinating survey of eruptions from the prehistoric to the most modern beginning in detail with the 1973 eruption on Heimaey in the Westman Isles off Iceland’s south coast. Where, due to luck and unexpected good weather, everyone not fighting the lava was evacuated. It was also when brilliant scientific research, speed and resources, including US equipment, saved the island's fishing industry by halting the lava before it reached and blocked the harbour. Even so 400 homes were destroyed and one person died.


The authors have written an extremely clear explanation of the geology of volcanoes, their associated phenomena and how they affect people and our environment. And it shows, whether the authors meant to or not, that the human damage suffered by eruptions in the last 250 years depends very much on the class of the victims and what the authorities choose to do—or not do—about the catastrophe.

Witze and Kanipe argue that the 1783 eruption of Laki in one of the least developed corners of Europe was one of the worst pollution events in modern times and across the world probably killed a million people. Jón Steingrímsson, local priest of Kirkjubær Parish in South east Iceland first noticed a huge black cloud from the “new volcanic fissure system” 45 kilometres to the northwest on the morning of Sunday 8 June 1783 when he set out to ride to church. He probably wasn’t surprised because there had been such strong earthquakes recently that some people in the district had taken to sleeping out in tents, unsure whether their turf and stone houses would survive.

Jón had had nightmares that he interpreted as impending disaster but he had also studied previous eruptions and noticed how ash layers varied in different parts of the country. He reasoned that this was a historical record of the severity of earlier eruptions and the destruction wrought. Witze and Kanipe point out, “Today this is standard volcanological wisdom, but in the backwoods of Iceland in 1783 it was cutting edge”.

Yet, despite reasoning that volcanoes were a natural occurrence and writing his material observations about these phenomena, Jón also blamed the immorality of people’s behaviour. Their love of eating, smoking and drinking had brought god’s wrath down on them all. Over the next eight months the eruption created the chain of Lakagígar--Laki's craters, that now stretches over 27 kilometers as it spewed out enough lava to "bury Manhattan 250 meters deep".

In his Fire Journal, Eldrit, Jón recorded the daily details of the volcanic phenomena—the ever increasing earthquakes, that water in the fast flowing river Skaftà suddenly dropped and then dried up altogether. The scorching acid rain and weird floating volcanic glass that Jón described as “blue-black and shiny, as long and thick around as a seal’s hair”.


Skaftà’s riverbed gorge filled with lava and by 17 July it was only three kilometres from the church at Klauster—the last refuge for those unable to get away.

On Sunday 20 July, with the lava creeping through Skaftà’s gorge heading for the little church crowded with survivors and the dark sky raining ash, Jón said the mass that is remembered as Eldmessan—the Fire Mass. He talked on and on to god and his parishioners, who seemed to be calmly resigned to death and took some comfort in being together. But eventually he stopped talking and they all went outside to find that the lava had stopped.

Jón explained the miracle in his diary when he wrote that there had been so much rain that two rivers poured over the lava dams and “with great torrents and splashing smothered the fire, which was churning and rumbling in the channel”. “During the time that had passed,” Jón wrote, “it had collected and piled up in the same place, layer upon layer, in a down-ward sloping channel some 70 fathoms wide and 20 deep, and will rest there in plain sight until the end of the world, unless transformed once again”.

The water was enough to cool the lava but there were another seven months of eruption to bear before it was all over. In that time, Jón had to bury dozens of his friends and neighbours, collecting their bodies from miles around with one young volunteer strong enough to haul the bodies back to the churchyard.

As the weeks went by, the eruption "belched out an estimated 122 million tons of sulphur dioxide, 15 million tons of fluorine and 7 million tons of chlorine”. It created Móðuharðindin, the hardship of the fog that killed around 10,000 Icelanders—a fifth of the population, mostly from starvation as half the livestock died. The sheep, cattle and horses—and people—were killed by fluoride poisoned grass as the fine ash cooled the atmosphere. Fish died, birds disappeared, sheep, farms were engulfed by flaming lava.

Witze and Kanipe only rate the eruption of Laki from June 1783 to February 1784 as a four on the eight point scale of the Volcanic Explosivity Index (VEI). They compare it other eruptions such as Krakatau west of Java in 1883—a VEI six and Mount Tambora, Indonesia in 1813, a VEI seven that killed around 71,000 people. Thousands more people died across Europe and America from the “dry fog”, the sulphuric haze that blocked out the sun’s warmth for months and attacked vulnerable hearts and respiratory systems. It also contributed to the worst winter for possibly hundreds of years.

The 1783 catastrophe is remembered at Kirkjubæjarklaustur with screenings of the short film drama in English, Eldmessan—the Fire Mass, about the eruption and its aftermath by Hringur Hafsteinsson , starring Hafstein Hafsteinsson and the people of Kirkjubæjarklaustur, which can also be watched online for 2 Euros. It gives a sense of the all encompassing catastrophe of the eruptions of Lakagígar. It also says that the Danish King tried to send help but it arrived it was too late.

Botanist Sir William Hooker went to Iceland in 1809 and wrote in his “Journal of a Tour in Iceland in the Summer of 1809” that Chief Justice Magnus Stephensen told him that he was at the court of the Danish king, just starting his career as a lawyer in 1783, when news of the eruption arrived. The king immediately ordered Magnus back to Iceland to make a report which was published in Denmark. Hooker added, “Funds were raised for the relief of Icelanders after the dreadful volcanic eruption of 1783. This money ought to have been immediately sent to the country for the use of its distressed inhabitants, but to this day it is retained in Copenhagen.”


I hope to be able to find out more about the truth of this soon.

Posted by Breiddalurblom at 00:58 No comments: