Reykjavik city celebrated its 18th annual Multiculturalism Day yesterday with a march and afternoon of music, food and information about the different nationalities now living in Iceland. The marching band was led off by Vikings which neatly made the point that Iceland is a nation of immigrants.

Reykjavik is a very diverse place these days but celebrating inclusion cannot be taken for granted and events like these are only part of the ongoing battle against racism and bigotry in Iceland. 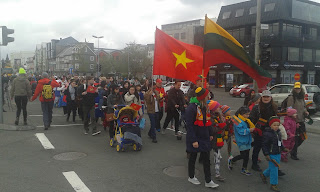 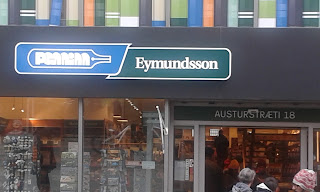 Storhaug was formerly on the left and says she was involved in anti-racist campaigns but has recently built a lucrative career from whipping up racism against Muslims. She says she began her campaign when she discovered that there were forced marriages and "honour killings" in Norway. Instead of seeing the obvious point that no group or culture is free of violence against women and condemning it for what it is, domestic violence, she began her bigoted offensive against Islam and all Muslims in the name of women's rights and freedom.

Norwegian Muslim women who choose to wear the hijab or niqab, of course, bear the brunt of the racist attacks against Muslims in the streets that books like these encourage.

So Penninn Eymundsson is fuelling hatred and profiting from it by selling this rubbish. It's going to take more than music, dancing and lovely food to challenge this bigory.
Posted by Breiddalurblom at 21:39 No comments:

When elections for the President of Iceland are held next month, it would be great if that person was someone who remembered what it is like to live as an ordinary person in Iceland, paying taxes, saving for holidays, not being married to a multi, multi millionaire - that sort of thing. The current President, Ólafur Ragnar Grímsson, who is standing again is still the favourite by a long way but then he assured CNN News that his family would not be found anywhere near the tax haven scandals that have engulfed leading politicians in the ruling coalition. He had to do a very sharp u-turn when the news about his rich wife's super-rich family and their money in the tax haven got out.

Here's a little mashup from Sveinbjorn Palsson of Ólafur Ragnar impressing on us just how much he will never be found in any such scandal. It won't be long til we know what the voters think.

Posted by Breiddalurblom at 23:36 No comments: