Uneven and Combined Development in Iceland: The privilege of historic backwardness

In 2009, as the financial crisis crashed over , Bourgeois Reykjavik was reassured that Harpa, the half built landmark Concert and Cultural Centre was to be finished despite the country’s effective bankruptcy.

The housing developments such as Vatnsendi and Flétturvellir were not so lucky, as seen here in Íris Stefánsdóttir’s pictures. 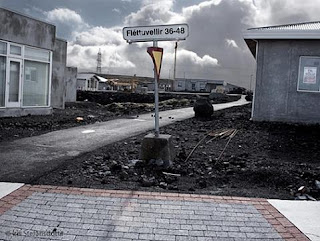 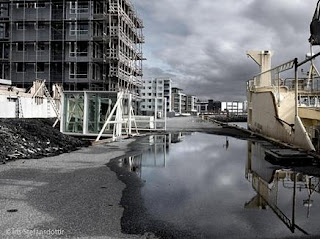 Finished in May 2011 Harpa is home to the Iceland Symphony Orchestra and Iceland Opera and it reports 350,000 visitors so far. This is about 30,000 more than the country’s population and suggests there have been a great many foreign visitors. It also means that some Icelanders can afford to go back time and again, and further suggests that a layer of Icelandic society is doing well enough out of this crisis, as in the rest of Europe and America where the rich are actually getting richer.[1]
Harpa has effectively been subsidised by the slashed pensions, short hours and unemployment of those now least likely to be able to attend the cultural events in a space that has ‘produced a clarity of acoustic that has reportedly moved some performers to tears of joy.’[2]

Well that’s reassuring; nobody wants to think that their deferred wages for their old age have instead gone towards producing the effect of a karaoke machine in a scout hut. In this respect has benefitted from its backwardness. In the phenomenon that Leon Trotsky called Uneven and Combined development,

Trotsky was talking about , in the 19th and early 20th century, then famously the most archaic and repressive part of . But too was peculiarly privileged in its historical backwardness for hundreds of years. The glory days of The Icelanders' sagas (Íslendinga sögur), the heroic stories recording the lives of ‘the most important families of ’ from 930-1030CE[4] were written down between the 12th and 14th centuries.[5]
Over the next 400 years the country was periodically wracked by Black Death, smallpox[6], and the hardship of the Great Smog (Móðuharðindin) following the 1783 Laki volcanic eruption. In eight months Laki’s volcanic fissures threw so much ash  into the atmosphere as well as spewing out clouds of sulphuric acid that it destroyed the normal summer weather across Europe causing famine. At home over 1/5th of the population died from disease and hunger as the livestock died.[7]
As a Danish colony under Danish monopoly trade, was only used as a source of raw materials with almost no capital invested. There were no public works, no large buildings, schools or university. Even in the fishing where Icelanders had exported fish products since the 14th century, simple lines were used and small open boats. A small development that improved the quality of life was when Icelanders learned to knit in the 15th century,[8] though handicrafts did not develop beyond the immediate needs of the homestead. The next major technological innovation was the introduction of the Scottish scythe in the 1860’s.[9]
The Icelandic landowning ruling class was most concerned to ensure that nothing interfered with the labour supply for the hay harvest which prevented any major technical improvements. This meant also that very few landowners would have had any capital to invest had they wanted to, until British dealers turned up in the 1860’s looking to buy hardy Icelandic sheep.[10] These of course were paid for in cash and this was only possible because trade restrictions were finally lifted in 1854.
Over the next 70 years British, Germans and most importantly for the development of herring, Norwegians with money began to see the potential for profit in .
But development is not a smooth progression as Trotsky explained,
‘the law of combined development – by which we mean a drawing together of the different stages of the journey, a combining of the separate steps, an amalgam of archaic with more contemporary forms. Without this law, to be taken of course, in its whole material content, it is impossible to understand the history of Russia, and indeed of any country of the second, third or tenth cultural class.’[11] 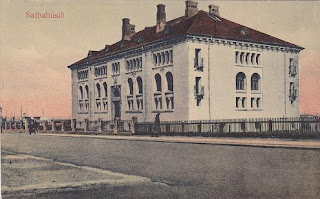 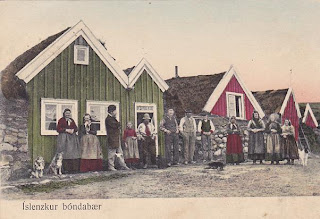 This process explains Reykjavik’s astonishing museum built in 1910 whilst most the people lived in turf and stone houses that didn’t amount to much more than glorified holes in the ground.
A substantial farm but still cold and damp.
Around 1910

Finally this picture of Reykjavik harbour encapsulates the theory of Uneven and Combined development. 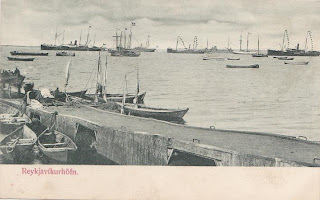 In the foreground the centuries old open rowing boats that used handlines and by the late 19th century, drift nets. Then, the decked fishing boats that used trawls. In their heyday, from 1890-1910 they could operate for about 28 weeks of the year, and the steam trawlers in the background that could operate all the year round and on which by 1920 each fisherman could catch 32 tonnes where the men in the small boats took 3 tonnes.
What Harpa demonstrates however is not the unevenness of the juddering bounds of a backward country catching up, but a society’s growing inequality. So how about free shows, concerts and opera tickets for the recipients of the food bank this Christmas.
[1] http://www.guardian.co.uk/business/2011/may/16/high-pay-commission-wage-disparity

Thanks to Resolute Reader for flagging up this lovely footage of Icelandic protestors egging the President, Prime Minister, Ministers & MP's outside the Althing parliament building in Reykjavik.

3500 angry protestors[1] stood outside the Althing today, against the temporary security fence around Parliament. They set off flares, threw eggs and fruit and beat against the fence calling for the government to go, and an immediate election.
The new session began with the President and the Bishop walking the few metres from the Althing to the Cathedral, followed by the prime minister, ministers and all the mp’s. They walked across the square though another hail of eggs. One man interviewed on camera said he wasn’t protesting, he’d just come to say goodbye - he is leaving for . Fishermen were also demanding quota changes because they can't live like this.


Out of town riot police protected the building as the local riot police have resigned. A statement from the Police Union said that the police are unhappy at being used as a shield between the government and the people but they could not refuse orders.
A petition of 34000 signatures has been handed in to the prime minister demanding the removal of index linking of mortgages which will only increase repossessions. Jóhanna Sigurðardóttir says this will be top of her agenda next week.

Meanwhile there seems to be some confusion as Steingrimur J. Sigfusson, the finance minister said later today that it would not be a good idea to make more cuts. However he is going to save 1% through ‘streamlining’, whist the Welfare Ministry announced cuts of 2 billion Isk or 2.3%. Furthermore Steingrimur still says will pay off its deficit by 2014.

180 jobs were lost in September and more are expected to go soon. Fuel tax increases have also been announced.
If I were the Icelandic government I would keep those security fences handy. They are going to need them again soon.
[1] That’s over 1% of the population, equivalent to a demo of 600,000 in .
Posted by Breiddalurblom at 01:10 1 comment: